After the cancellation of Agritechnica 2022, SAUER BIBUS Managing Director Ralf Schrempp did not hesitate for a second to create his own format instead. Because Ralf Schrempp has already experienced the great importance of close dialogue with customers and interested parties through numerous live stream workshops over the past two years.

For the event Messe TRADESHOW@HOME for the event period from 27.2. to March 5.3. 2022, a hall area at the company's location in Neu-Ulm was quickly converted into an impressive exhibition stand and equipped with professional camera and transmission technology.

The event was supported by a dual system, consisting of customer days with daily personal customer visits and the SAUER BIBUS live stream event on March 3rd, 2022, a live transmission directly from the trade fair TRADESHOW@HOME.

In addition to the long-standing core competence of hydraulic drives, the event focused above all on the new challenge of electrical solutions, which are now also playing a central role at SAUER BIBUS.

For this purpose, the company had developed its own electric trade fair model, which rightly became the star of the event. Ralf Schrempp is enthusiastic:

“We are impressed by the enormously positive response to the project presented.
In the meantime, there have already been specific inquiries from customers, but also from subsidiaries of our globally active Bibus Group, who would also like to present our development expertise with this electric model.”

SAUER BIBUS was supported in conducting the live stream event by close technology partners. Danfoss Editron, Kawasaki, Hydro-Gear, Xerotech and I&W ensured a high level of response and, with their technical contributions, achieved lively participation in the following discussion round.

For Ralf Schrempp and his team, the investments in this event have already paid off and are confirmation that they will continue to follow their own path. For SAUER BIBUS, however, participation in important trade fairs will remain an integral part of the marketing mix in the future.

From prototype construction to series production

In addition to qualified development and prototype construction in its own workshop, SAUER BIBUS, as a technology partner for drive technology, also offers highly efficient assembly and series production in its own company. These prerequisites are crucial for many customers, for example in order to get the first prototypes quickly and confidentially as part of system development, without having to involve third parties unnecessarily.

All doors are open

The SAUER BIBUS team is always available to customers and interested parties to develop and produce new projects that are open to all technologies. With expertise in hydraulics and many years of experience in electric drive solutions, the company is able to always implement the best technology solution for each specific application. 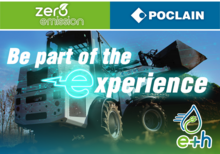 After the cancellation of Agritechnica 2022, SAUER BIBUS Managing Director Ralf Schrempp did not hesitate for a second to create his own format…

Tradeshow@home: Greetings of our Technology Partners!

Also our technology partners are also looking forward to our livestream event TRADESHOW@HOME on March 3rd, 2022. We are happy about the three already…

Tradeshow@home instead of Agritechnica: Technology Partner of Drive Technology

From mission to vision – in recent years, SAUER BIBUS has evolved from a hydraulics specialist into a partner for drive technology.